In our
final match of the 2013 AEGON Team Tennis group stage, Sunday 2nd
June saw Bromley Lawn Tennis Club playing away to Sutton T &SC’s first team.
Both sides remained undefeated all season and, whilst Sutton had a match in hand,
this fixture would ultimately decide which of the two would be crowned South
East National Divisional Champions and gain automatic qualification to the
Bournemouth Finals. 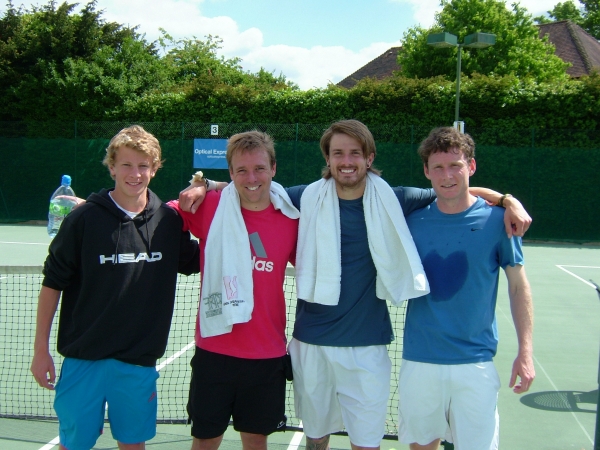 With the
sun shining and Sutton having excellent home support from their members, spearheading
our campaign for Bromley was squad stalwart Rob Searle who was up against
Sutton’s James Ireland. Searle got off to a great start having won the first
set 6-2 but, despite being two points away from winning the rubber in the
second set, James Ireland dug deep and ultimately came through to win 2-6,
7-6(7), 6-4.

Nick
Cavaday, Bromley’s Team Captain, played at No.2 against Adam Thornton-Brown.
Despite losing the first set 6-3, Cavaday came through to win 3-6, 6-0, 6-4.

Having been
undefeated all season in his AEGON singles rubbers, Bromley’s third player was
Harry Skinner who was up against Sutton’s Nick Weal. In what was yet another
tight and competitive three setter, Skinner managed to edge out the win over
Weal 6-4, 1-6, 6-3.

Completing
Bromley’s line-up at No.4 was fifteen year old Tommy Cartledge who was playing
his first AEGON Team Tennis Open fixture. Despite going down to Sutton’s Jamie
Malik 6-1, 6-3, Tommy played well and will certainly be a good addition to the
Bromley side in the future.

At 2-2
after singles everything was still to play for.

Harry
Skinner and Tommy Cartledge teamed up to take on the Sutton doubles pairing of
Josh Jones and John Richards, eventually losing to the Sutton boys 6-2, 7-5.

Nick
Cavaday and Rob Searle were pitched against James Ireland and Adam
Thornton-Brown. Bromley won the first set 6-1 but the Sutton pair came back
strong to take the second 6-4. A Match Tie-break (first to ten points – clear
by two) would either crown Sutton as overall winners or take the fixture into a
tie-break shoot out. The breaker couldn’t have been any tighter but the Bromley
boys dug in to win the rubber 6-1, 4-6, 1-0 (8) and force the fixture into a
shoot out.

Rob Searle
and Harry Skinner were the elected singles players for Bromley and would play
against Sutton’s James Ireland and Jamie Malik.

Despite Skinner
being 9-3 up in his Match Tie-Break against Jamie Malik, the Sutton player dragged
the score back to 9-9 before Skinner eventually edged out to win 11-9.

Everything
rested on the outcome of the breaker between Searle and Ireland which
was intensely competitive and could have gone either way. With a final score of
13-11, Rob Searle came through to win the breaker and the overall fixture for
Bromley 7-6.

Captain Cavaday
was delighted after the match. “This was always going to be one of the toughest
ties of the group. Not only were we up against a titan of a team in Sutton but
this was also one of the busiest days in the tournament calendar with both
sides having players that were unavailable. We came here with no expectations
so to edge out a victory and ultimately finish top in the South East National
Group is amazing and truly reflects the Bromley team spirit. We had a few
travelling supporters with us today and this really helped the boys to lift our
game and get the win.

The intense
competition today is ultimately what AEGON Team Tennis is all about and Sutton is
certainly a team to be reckoned with at finals. We wish them every success in
their play-off match and hope to see them in Bournemouth”.

Click below to see the South East National Group standings: