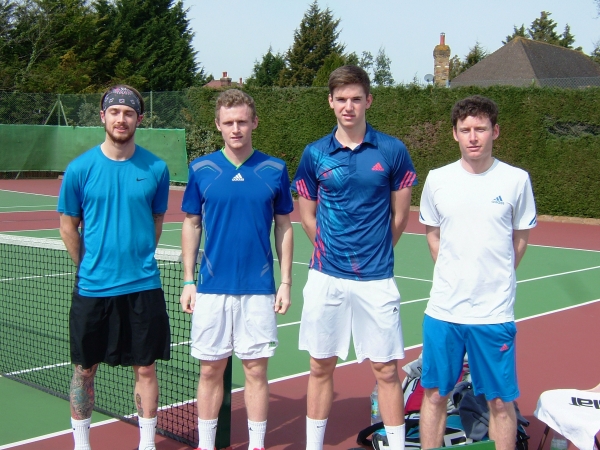 Last Sunday
saw former three times AEGON Team Tennis National Champions Bromley Lawn Tennis
Club take on Virgin Active Surrey in the first round of the 2013 competition.
The tennis equivalent of the football premier league, the Bromley side were
crowned champions in 2010, 2009 & 2005 and were also runners-up in 2008 and
2011.

With an
invigorated squad for the new season, spearheading the Bromley campaign on
Sunday was team captain Nick Cavaday who was up against Virgin’s Philip
Stephens. In what looked like a text book start to the season, Cavaday quickly
despatched his opponent in straight sets winning 6-1, 6-1.

At No.2 for
Bromley this week was Harry Skinner, one of our new additions to the squad and
who is currently ranked 71 in the country. Playing against local boy Andy
Burgoyne, Skinner overcame his opponent 6-2, 6-3.

Two new
youngsters in Myles Orton and Sam Hutt completed Bromley’s line-up at 3 and 4
respectively. After taking Virgin’s Casey Lyonette to a tie break in a tight
first set, Orton eventually went down 7-6, 6-0.

Sam Hutt,
currently ranked 45 in the country, showed true grit in his first appearance for
the club beating Mark Whitehouse in straight sets 6-2, 6-4.

Bromley went
in to the two doubles rubbers 3-1 up and required only one of the matches to
secure overall victory.

Cavaday and
Skinner paired up to take on Stephens and Burgoyne, with Orton and Hutt pitched
against Lyonette and Whitehouse.

Both the Bromley
pairs got off to a good start winning their first sets 6-3 and 6-0
respectively. Victory was in Bromley’s sights but Virgin came back fighting
winning the second set in both ties. At one set all in both matches the doubles
rubbers would be decided on a Champions tie-break.

With the
Bromley home spectators getting behind the team, the Bromley boys raised their
games and won both their champions tie breaks to edge out the match.

Team
Captain Nick Cavaday was delighted with his team’s performance. “We were hoping
for a good start to the season and all the guys played extremely well”.

The Sandford Road club
continue their campaign with an away match at Woodford Wells in Essex on Sunday 21st April.